Please see attached start list and Reg for the trial this Sunday.

Entries will also be taken on the day but will not count towards the final results and championship points.

Weather looks like it will be kind to us this year so please come along and join us. 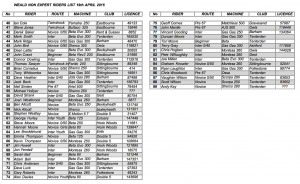 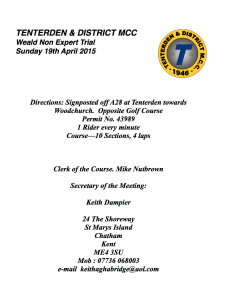 Just a quick note to say don’t forget to send in your entry for our first
trial of the year “Weald Non Expert” at Clay Hill, (Opposite the Tenterden
Gold Club, TN30 7DR) on Sunday 19th April. Along with your riding support we
will be looking for observers to help out on the day so if you have a spare
morning then your time would be greatly appreciated by the club to make this
event a success.

Full details can be found in the Sporting Motorcyclist magazine. Keith
Dampier will be the secretary for the meeting and he can be contacted on
07736 068003 or keithaghabridge@aol.com

This is a non expert trial so will have routes for Inter, Novice and
Beginner and no doubt we will also be using “Rashers Ravine” as well. Let’s
hope the weather will be kinder this year after the monsoon that engulfed
Tenterden at this trial last year.

Roy has very kindly updated the museum with some new pieces donated by Karl Pugh’s family through Ned.

Please take a look at the attached photos…well worth a visit as well. 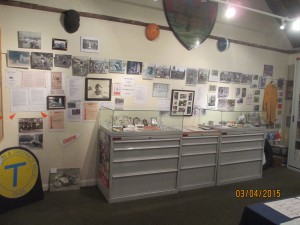 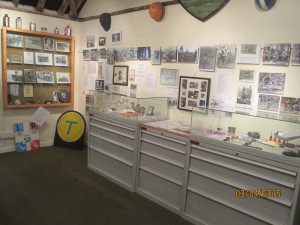 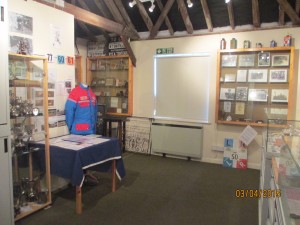 well done to the Intermediates and Pete Southcott for winning their respective classes.

I’ve known Barry since the 1960’s, at a time when we both used to frequent a Tunbridge Wells café called “Toms” It was a favourite meeting place of local motorcyclists or “Rockers” as we were known in those days. I remember first being introduced to Barry at Brands Hatch. They had open practice on Wednesdays back then and if it was my half day at Philpot’s Motorcycle shop I used to go up on one of my bikes to watch.

This particular day Barry had come up on the pillion of some local hero that thought he could be world champion. Needless to say he went out in one of the practice sessions, crashed and ended up in hospital, wrecking his bike also. This left Barry stranded at the circuit with little money. Someone, I forget who, asked if I could give him a lift back to Tunbridge Wells, which I duly did. “Never again” I heard him mutter as he got off!

After that he took up an interest in trials, as had I, and we used to travel together sometimes to events. One notable event was the 1970 Isle of Wight 2day trial, but that’s another story!

He joined Tenterden and District MCC, and later the Owls MCC, sitting on the committee, and helping set out trials for some years.

In the late 60’s we both got married and started families, so other things occupied our time. We met again in 1973, when both moved into a new estate at Matfield where we have remained to this day.

After a few years we got back into pre 67 trials on Triumph Twins with some success. Barry also worked as a reporter for TMX, and covered many South East trials including national and internationals.

In the mid 70’s he started working as a mechanic at the Kawasaki Paddock Wood motorcycle business run by Paul Smart and Roy Francis, during the boom time for bike sales. He was a valued and well liked trials riding member of the staff.

One day he asked me if I would like to help out as a mechanic on Saturdays “you bet” I said! We had a lot of laughs there and made contact with several famous motorcycle racers at the time.

The years rolled by and Barry spent more with his other passions, fishing, train spotting and model railways, which I believe he kept up to very near the end.

Barry was a good looking lad with a great personality and always made a big impression with whoever met him.

We will all miss him a lot.

The South Eastern Centre and trials has lost one of its ‘characters’ in the form of Mr Gordon Davis.

He died at his home in Bexleyheath on New Years Day at the age of 87.

Gordon has been a leading light in the South Eastern Centre trials scene for many years, a former Centre President and Management Committee member.

His funeral will be on Thursday 22nd January at 10:15am at Eltham Crematorium, Crown Woods Way, SE9 2AZ.

Everyone is welcome to attend and I’m sure that many will!

Gordon’s family have requested no flowers, but donations instead to Diabetes UK, for which Gordon raised donations by various means.  One for which he would enjoy relating was a ride on his 1955 BSA from Lands End to John o’Groats, where he even persuaded diners in transport cafes to part with some loose change!

Donations can be made on the day of the funeral, or a cheque (made out to Diabetes UK) posted to the undertakers, W. Uden & Sons. 6, Townley Road, Bexleyheath, DA6 7HL.  Please mention the donation is in Gordon’s memory and the date of the funeral.

This weekend sees Round 1 of the 2015 East Kent Combine Championship (and our own club championship round) with a trial run by our friends from the GEST Club. Details and entry list below. Day entries accepted and all riders are eligible for championship points. For those that have never been there before this is an excellent piece of land to ride with some good banks, a rocky gulley, streams and usually plenty of mud!

1030am Start. Monkins Farm, Horns Cross, Northiam, East Suusex. Trial will be signposted off the A28 between Northiam and Broad Oak. Seceratry is Jen Heathcote 07541206131. Entries to date. 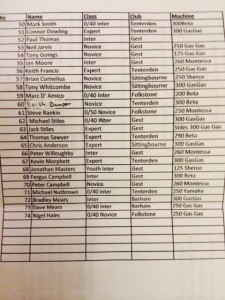 Sad news that former club member and correspondent for the Trials and Motocross News, Barry Swann passed away just before Christmas.

Some may remember him from working at Kawasaki Paddock Wood.

The funeral is on Wednesday January 7th at Tunbridge Wells Crematorium.

A good turnout today for this relaxed practice event that was made possible by Colin allowing the use of his excellent land, which was in prime trialing condition. Pete with able assistance from Colin and  Dave H laid out 6 sections for all to play on and enjoy and it was a great way for everyone to blow off the cobwebs of the festive season and get some practice for the trials ahead…. And a huge thanks to the boys and Colin for putting this event on. Good fun was had by all and we hope to have few more similar events during 2015.  Happy New year. A couple of pictures below 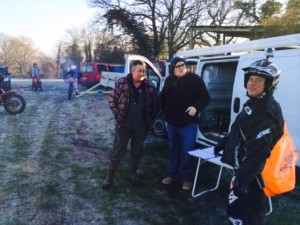 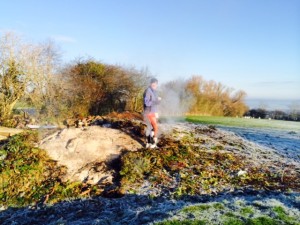