Tenterden MCC arranged an extra youth trial which was held in St Michaels on Sat 8th October. Many thanks to Mark, Trina, Jasmine and Curtis Mealham for arranging and setting out the event. Results are as follow’s

Amended results now attached.. apologies Dean for missing you off and to Sophie who actually rode the youth novice route.

Following torrential rain on the Saturday the conditions on Sunday were perfect, the sections stayed dry and very little alterations were needed before the trial started.  The Brush family arrived on mass over the weekend and along with Mike Nutbrown we managed to get all the sections laid out by early afternoon,it goes to prove that many hands make light work. The family numbers increased on Sunday with Jo providing the secretary duties, section of fine cakes, and husband Jeff as an observer. With all their help plus the usual backbone of helpers that observed and helped pack away at the end the whole weekend was a great success.

The most positive aspect of the trial was the number of youth riders that were present, they made up 25% of the numbers with 12 taking part. These kids have real potential to be very good riders and their enthusiasm was really inspiring. With the help of our own Mike Nutbrown we plus several other clubs are giving these kids access to practice and to improve and this is something that will sustain the sport for the future.

Well done to Mark Smith who took the overall win and will receive the “Murray Brush Trophy” at our presentation night early in the new year.

3 x generations of the Baldock family below and some of the finest motorcycle minds spending an hour to assemble a toilet tent only to find it was inside out ! 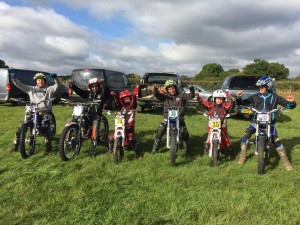 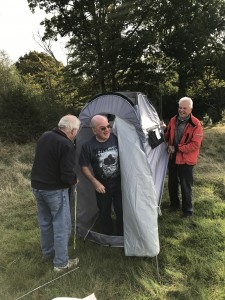 Along with the usual Novice, Intermediate and Expert routes, there will be a Beginner route at this trial so for all riders young and old please do come along and take part. The event is open to all Youth and Adult riders and will start at 10.30am. Anyone entering on the day could they please bring along the correct money or cheque made payable to “Tenterden and District Motorcycle club Ltd”  (not shortened please).

Usual plea for observers and help from club members to tidy up afterwards if you’re available.

The start list has not been publish for this trial as the secretary has been away on holiday but the cover sheet and trial instructions can be found on the link below.

The final round in the Tenterden MCC youth trials championship was held today at Checksfield Farm Tenterden. Thanks to all rider and parents that supported these events. Also a big thank you to Colin Millen for the use of his land for the event. The results of todays trial are below:-

Final scores from the championship are listed below. The championship awards will be presented at the Tenterden MCC annual awards event, keep an eye out for the date on this website.

The final round of the Tenterden MCC youth trials championship is being held at Checksfield Farm, Preston Lane, Tenterden on Saturday 10th September. The event starts at 1.00pm with signing on from 12.00.

Ned Noakes, the President of the Tenterden & District Motorcycle Club passed away recently after a short illness, at the grand old age of 93.

Joining the Tenterden club in the early 1950’s, becoming a committee member in 1957, Ned was Chairman from 1971 before being made President on the passing of club founder Karl Pugh. Seldom if ever did Ned miss a committee meeting over the years and was very much the father figure and a true ambassador for the club, always giving support & advice to those doing the day to day running of the club.

He lived all his life at the house adjacent to the forge at Pye Corner, Ulcombe, where he had taken over the running of the family agricultural engineering business from his father Nobby Noakes.

Ably backed up by his near neighbour Percy Smith, Ned assisted in running grass track and trials events together with social functions, attending E.K.T.C. & A.C.U. business meetings on behalf of the club.

A keen club rider Ned rode a AMC four stroke machine in the 1950’s trials before changing to the two stroke Greeves which he rode in the 1961 Scottish Six Days.

For many years he was also a supporter and keen spectator at the Isle of Man Road races with friend Spider Burniston.

Ned’s all round interest in motorcycling, classic cars, agricultural machinery, ploughing matches never left him short of knowledge or conversation often meeting up with a wide selection and generations of people including former customers, club members and landowners.

Ned was not a great drinker, but a great socialiser he was known to many in the local pubs.

In the late 1950’s an employee of Ned’s engineering business was Maurice Ivy, father of the later to become World 125cc Road Race Champion motorcyclist Bill Ivy. Bill’s first motorcycle was a 250cc Francis Barnett that had been used by drivers of the Noakes contracted out combine harvesters to get home from the fields.

After retiring and closing the agricultural business, Ned maintained his interest in classic cars owning Lancaster and Singer cars on which he carried out high levels of restoration and maintenance. He would show these cars at events throughout Kent & Sussex and was still driving to his shopping etc. in Maidstone, Headcorn and Tenterden, maintaining his independence after losing his sister last year.

May we wish that future generations give the support and have the enthusiasm for motorsport & club life that Ned portrayed unreservedly.

A true ambassador and gentleman, who will be greatly missed. 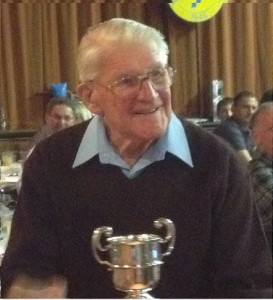 With great sadness, I was informed yesterday evening that our club president, Mr Ned Noakes sadly passed away last Thursday following a short illness. Ned was 93 years young and had been a stalwart of our club for many decades, we last saw him in March at our presentation night where he proudly presented the awards. More details and dedications to follow in the coming days.

His funeral will be held at Ulcombe Church on Thursday 8th September at 11am for anyone wishing to attend.

Please click on the link below for the full results from last weekends EKTC Trial.

Once again thanks to everyone that came along and supported and helped.

Full results by class with club details to follow shortly.

Entries on the day will be taken..