Firstly, happy new year to you all.

Please see below the link to the final club championship standings for the last EKTC season.

Well done to all the class winners and all trophies will be presented at this years presentation night on Saturday 18th February.

On Sunday the 26th of June the club will celebrate its 70th year with an extended exhibition of the clubs history at the Tenterden Town Museum 11am-4pm all friends, members past and present are welcome.

Please find below the links to the starting list for this Sundays trial as well as the cover sheet.

We will be adopting a mass start for the first 40 riders on the list with a second wave of riders to follow around 15/20 minutes later.

If you could please ask any visitors to keep their dogs on leads at all times due to the close proximity of a number of sheep in their lambing season.

Entries will be taken on the day for all those wishing to ride and all offers to observe will be gratefully received.

Back by popular demand, the annual Tenterden MCC Club Doo will take place at Bethersden Village Hall on the 12th of March. Always a giggle and a great evening and once again this popular evening open to all past and present club members, families and friends will be a big screen Horse Race evening and a fish and chip supper, a bumper club raffle, mixed with the presentation of our prestigious club awards. To keep costs down this years event will be a ‘bring your own drink’ evening. Tickets are available from Dave or Keith at £10 per person including Fish and chips or Sausage and Chips.

As our thoughts turn to 2016, we all start thinking of our new year resolutions, give up the booze, lose weight, eat better, get fitter, play more, to try and not be all consumed by work…. and of course most importantly get that bike out that has sat in the shed or garage for the last I don’t know how many months (or years!!), get out and have one more ride or ride that trial you’ve always loved, everybody can find an excuse, so you need to make it happen, get that bike out and ride and enjoy the banter and giggle of the trials world or even for the blessed few try and win that class trophy or championship one more time…

So to help you, here are a few early year dates for the dairy in 2016. Get your entries off now or at the very least block these dates in your diary…

17th Jan – Sidcup 60 Trial – Canada Heights fun and frolicks – some excellent technical sections around the motocross track – 90 entries in so far so only 40 places left as of today. See Sidcup and District MCC Website for details

24th Jan – The Ashford Dunlop – needs no introduction, at the Kent Gliding Club, maybe not quite the event it used to be but you never know, always a challenge and the weather can add a little spice.

7th Feb – The Walker Memorial Trial Sittingbourne – fast becoming many peoples favourite early year trial with a long ride round and a route for all.

The second Sunday from February to June then from August to Decemeber will be the East Kent Trials Combine Trials, routes for all from Expert to beginner in the local East Kent area. The next one will be the

The current club championship aggregates are available on the aggregate page. A reminder the season runs from September 2015 to August 2016, with the best 7 scores to count in each class. 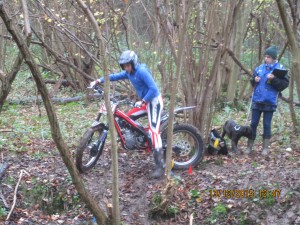 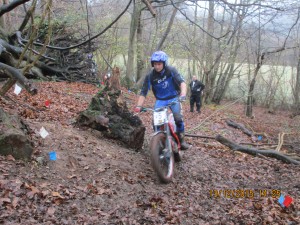 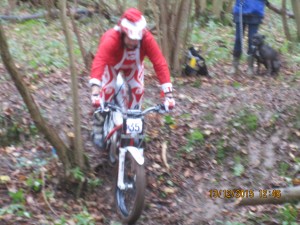 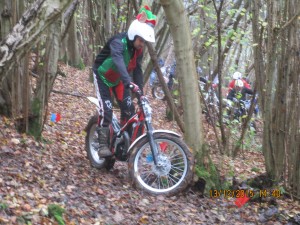 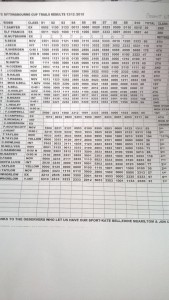 Well done to our friends at Sittingbourne for running the Dec EKTC Combine. Elf and Santa made the results – proof now added

These results have been temporarily removed as there was clearly an error in them. Once rectified these results will be republished. Apologies..

Awards will be presented at the annual club bash early in 2016.

When Luckio sent me a  text to say ‘do you know anyone who wants to ride in the team trial next weekend’, I realised what he really meant was ‘ do you want to ride?’.

I have always said if I rode one trial a year it would be the team trial at Crowborough. So I had to say yes… I love the rocky gullies and it is a rare treat ‘down south’ to ride sections like you find at Hourne Farm and Team Baker, Sturdey always seem to get it right.

Not only is it a great venue but it is also a really good laugh and unique in the fact that you ride in this event as part of a team in what is usually a purely individual sport. Team Tenterden are renowned for enjoying the team trial

Connor had unfortunately had to drop out of one of the 2 teams and thus a space became free at the last minute – I jumped at the chance to rearrange things and ride.

Rather amusingly, I was part of the Tenterden Young Guns team, riding with 2 riders who are developing very fast and improving every week, Joe Millen and Jack Beck.

As we were a little slow getting the entry in we started at the back of the field, not ideal given the heavy rain as we arrived in the car park and unloaded… The team and club atmosphere shone through despite the weather with all 6 of us heading to the first section together for a bit of banter and laughter – old’uns v young’ uns..

I haven’t ridden this trial for a few years, but the format is usually the same with half the sections on the rocks the other muddy, slippery banks and climbs.. We got the bum deal with conditions deteriorating by starting on the rocks.. but heh ho.. we elected just to get on and ride having  a laugh.. Expert, inters and Novices all ride one route – just how it should be..

Over the years I have benefited from the experience and guidance of older riders (Graham Kemp, Vince Boozer, Kev Morphett etc)– all of whom have been only to happy to help with tips and assistance and I have always tried to help anyone I can in a similar way, so passing on some of that experience is always a pleasure, especially when people are happy to listen..

So with Joe and Jack we walked the sections together agreed the route and a plan, I tried to stick to the plan (once failing badly much to everyones amusement!) and then the boys could see how it is or isn’t done… well it worked on section one as we started with 3 cleans!!

We kept it steady and started well, the old boys soon pulled away from us, as us ‘young uns’ soon spent more time chatting/debating sections than riding, this probably wasn’t ideal given the conditions but we were enjoying ourselves and actually all riding pretty good.

Neither Joe nor Jack have ridden much on the rocks, but you would never have guessed, Joe was riding extremely smoothly on the rocks at a great speed to maintain control but have enough aggression to tackle the larger parts. Jack equally wasn’t to be out done, riding straight over the more difficult parts with only the odd dab going down and in particular tackling some of the muddy sections with some fine rides.

We caught the ‘old uns’ up on the muddy sections and just in time to watch Pete on his 750cc Beta have an amazing ride on the worst section of the day a straight up and down a bank with the down being horrendously slippery and the up being a deep 4th gear rut.. Pete’s ride to get out was superb, only bettered by his complete collapse on the 2nd lap as fatigue set in on the very same section – so much so I fear he might still be there now!

In truth we caught the other team up as Micheal had a puncture, but undeterred all 3 of them were riding equally as well which was great to see, Mark was even seen hopping the back around to negotiate a slippery section –  a braver man than me for sure..

With over 100 riders there was the odd queue but we kept moving pretty well, staying together as a team with plenty of morale support and jeering going on, even if the walking the sections on my part had fallen by the way side due to tiredness! We were ably and well supported by Colin and Roger and also kindly by Henry and Connor who turned up to watch on the day.. and by Micheals dad Bernie.

6 excellent rides saw all of us to the top of the long rocky gulley with only the odd mark going at the end with the true young ones suffering more than the old boy… There were a couple of fourth gear get through sections and both Jack and Joe gave it everything to attempt to get through, over time both are sure to become very, very capable riders and adapted well from rocks to mud in equal measure.. I think they both found a few extra 1000 rpm’s on their bikes on the second lap which won’t do any harm in the winter months in East Kent..

We finished around 3.30/4 o clock, shattered, wet and very muddy, with the 2 teams finishing just a few minutes apart which was great, soaked and caked from head to foot, but having had a thoroughly enjoyable day..  I for one really enjoyed the trial and riding with Jack and Joe was a great laugh with no one taking it too seriously, with both being great company and equally trying as hard as they could in the sections.. Thanks lads for a great days trialing..

As it turns out not only did we have a great laugh on the day but we actually did quite well with myself, Joe and Jack coming second out of the 18 teams in the team event!! Only being beaten by team Erith.The clubs best place for many a year and so close to winning!! And the ‘old uns’ finished a very respectable 7th. Well done Team Tenterden.

Roll on next year…

Thanks to Rodger Beck for the photos please see attached.